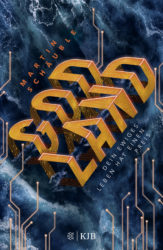 After the Climate Wars: the rich people have fled the dire reality and let themselves be uploaded into the virtual paradise Godland.

Yolanda and her friends, as real people, are working on remote islands for the technical support. As a reward for twenty years of service, the workers will be granted access to that virtual paradise as well.

Until then, their lives are widely controlled by the AI Godmother which is in charge of Godland: it watches, commands, and punishes. But it also takes care of the workers’ wellbeing and the social hierarchy.

For Yolanda, Godmother almost feels like a real mother. But when Godmother forces her to tell a terrible lie, doubts begin to take root in Yolanda: is it possible that the entire system is only a fake?